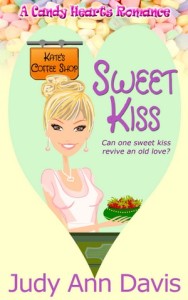 Be delightfully transported to Little Heron Shores as soon as you open Sweet Kiss. The community is so perfectly evoked, you’ll feel like you live there and of course you’re rooting for café owner Kate to get together with her returning best friend Tappe–who has sold his internet security company and is back in town to stay. Judy Ann Davis provides a masterful backdrop of hometown nostalgia for the rekindling of high school affection into adult forever after. Find out how Kate and Tappe maneuver through their own insecurities, and the roadblocks thrown up by Kate’s angry sister and the clueless postmistress attempting to reel in Tappe and make him husband number three.

Three more romances to start the week off right!

One Kiss by Misty Simon
Was that one kiss only New Year’s eve magic, or something more?

Ever After by Candace Sams
Can Keira and Dillon put aside their differences in time to find an ever after love?

JeT’Aime by Ursula Whistler
Love is its own language.

For You by Emma Kaye 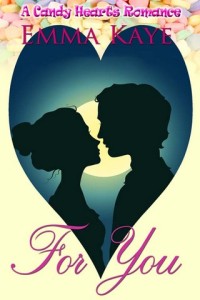 Financial advisor Drew wants more in his life than work, but hasn’t met anyone…until he risks his life to save a friend, and wakes up in Regency London, the spitting image of a lost-at-sea earl whose bed he is sprawled across. Leaning over him is the earl’s lovely widow Julia, Lady Engledown, who is bereft, not because her heinous husband is gone but because he drained her inheritance and made no arrangements for her and his mother. The selfish cousin has already staked claim to the family estate. Masquerading as the returned earl, to whom Drew bears an uncanny resemblance, Drew rights the financial wrongs he uncovers, along the way realizing Julia is the woman for him. Too bad she’s from a different century. Emma Kaye gives us what we want in a time-travel Regency romance—an entertaining story juxtaposing Drew’s modern off-the-cuff responses with the proper conduct of Lady Engledown—until we happily discover Lady Julia is not so proper in the bedroom. In the best of historical traditions, at the end, Drew is rewarded for putting concern for those he cares about above any concern about himself. A well-done story sure to please regency and romance readers alike. 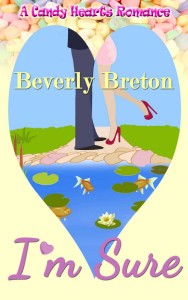 Maggie, the owner of Peggy’s café in Riverton, California, is a chatterbox these days. She’s excited about the upcoming February 10th release of my Candy Heart Series title I’m Sure.  She’s got a supporting role, as do two of her sandwiches, and she thinks—well, she can tell you herself…
Maggie rearranges her ash-blond-from a bottle locks to settle over her shoulders, framing the  very ample chest she’s showcasing in a bustier-inspired top straight from the racks at Forever 21.  Because that describes Maggie—who is on the high side of fifty—to a T; Forever 21. She finishes with an upward push on her hair near her crown, for height. Blinking her mascara-laden eyes, she blots her pink-frosted lips on a tissue. “Oh, am I on?”
Yes, Maggie, you are so on.
“Hi everybody. I’m Maggie. I run Peggy’s café, the best place to eat, not just in Riverton, but anywhere around here. You should see our menu, which is real cute.” Her long French manicured nails on display, she pulls a laminated card from one of her counter racks. “I’ve got one right here. I’ve named all the sandwiches, you know?” After a moment of indecision, she retrieves leopard reading glasses from under the counter, balances them on her nose, and starts reading. “Like The Sky is Falling—that’s a chicken sandwich with everything on it, and–” She jerks her head up.
I just reminded her what we are talking about today.
“Oh, yea, Megan Donovan. The water garden designer.” Maggie slips her glasses off and releases a loud exhale. “I gotta admit, that long hair of hers, that copper shade, is to die for.” She purses her shining lips. “But I really think that girl could use more make up. Where are her eyelashes? And every time she comes in for lunch with that friend who works with her, it’s like the girl’s been on year-long safari. Khakis, boots, mud spattered.” Maggie shakes her head. “Until the other day. You could have knocked me over with a feather when she walks through the door wearing a clean T-shirt–although it did need sparkles or somethin’–with this man.” Maggie’s eyes widen. “I’d never seen him before, but woo-wheeee. Tall. Cheekbones. A body that would take no prisoners. Calendar material.” Her eyelids dip lazily as her glossed-mouth widens into a cat-ingesting-cream smile. “What a woman wouldn’t want to do with that man.”
Did she just close her eyes? Her lunch rush could start any moment…
When Maggie’s lids pop back up, her gaze bright. “Jason.” She claps her beringed hands. “That was his name. Jason. He entered my candy heart contest for a free lunch…after I asked him, too, anyhow. I hope he wins, and brings Megan. I like her. She’s due for romance, if you ask me.” She snaps her gaze up, peering into the ceiling rafters of her café. “St. Valentine, you listenin’…?” 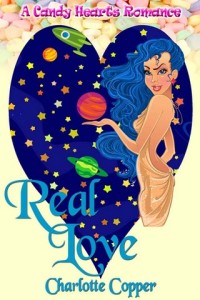 Monda is on her way to be delivered to her new master when her spaceship crash lands on an unknown planet. Her mistress is unconscious; Lieutenant Patrick Lancaster is anything but when he steps out of his shuttle craft and lands his gaze on this blue-haired vision. Monda dreams of a love pairing, and this unexpected detour may offer an escape from her expected path. But has the alluring Patrick already chosen his ship mate Demonna for his love mate? Monda wants to be rescued from her fate, Patrick is the man to do it, and Charlotte Copper is the author to write a charming story with a surprising twist about these two in a fantasy universe, keeping us happily engaged right to the very end. Monda is no helpless victim. A few more blinks of her large eyes, an introduction to popcorn, movies, and sweet candy hearts on the mother ship, and Monda could find her fantasy coming true…

Equations, cupcakes, and animals–choose all three with these Wednesday winners from the Candy Heart Series.

Me + You by Brenda Gayle
Math teacher Lori Tait is solving the equation for love.

Adore Me by Darcy Lundeen
A hacker brought them together, but will her need for professional success drive them apart?

Available at http://www.thewildrosepress.com or on Amazon.  Gotta love this time of year…

Adore Me by Darcy Lundeen

I adored this book.  Meredith is a bake shop owner who is having an unusual amount of trouble with her computer. Vlad is the tall, handsome not-geeky computer geek who arrives to troubleshoot. But Meredith’s got more problems with her business than her computer, and she’s not sure Vlad is suitably concerned.  Is he around just for a romp and some cupcakes? Adore Me is a rollicking good read with one of the more creative uses of candy hearts likely to be found.  Highly recommend; Darcy Lundeen is an author to follow!
To Be Released:  January 20, 2016

If you haven’t caught the Valentine’s Day spirit yet, this is the week to do it, and here’s three stories to start you off!

Real Love by Charlotte Cooper
Her eyes and heart are open to new worlds and new possibilities.

Say Yes by Katie O’Sullivan
Can Ben convince Darby to consider him for more than just a place on the gallery walls?

Available at http://www.thewildrosepress.com and on Amazon.  Love is in the air!

Charm Me by Tena Stetler 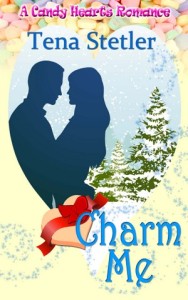 Devlin is not your typical ex-seal…since he’s half werewolf.  And Summer is not your typical yoga studio owner, since she’s an elemental witch.  When they meet, sparks fly, literally, but sharing their supernatural secrets is not something either of them do easily.  They can’t stay apart for long, and Divide, Colorado, really heats up when this alpha male mates with this bewitching female. Ms. Stetler brings us very likable characters in a number of scenes so well described, the reader feels right there with them — at the gun shop, on the ski trail, at Devlin’s enticing mountain lodge home. If you want a little magic, more heat, and a traditional happy-ever-after all wrapped up in one delightful Valentine’s Day package, Charm Me is for you.

Some like it hot…if you’re one of them, check these titles out.

Red Hot by Kayden Claremont
The man of her dreams doesn’t know she exists, but she will change that.

Sweetie Pie by Willa Blair
Can the island magic in Makenna’s heritage save their romance, or will Tom’s secret tear them apart?

Purchase at http://www.thewildrosepress.com, or Amazon.  Turn the fans on!